In Pep’s old club own of Barcelona when they banned bullfighting it wasn’t out of sympathy for el toro but because it was considered dangerous to the human. The first half saw West Ham come close to getting slaughtered as our toreadors poured forward like liquid velvet. Of course the main event according to the […]

Well they’ve started, the media parasites’ gross mis-use of the ‘F’ word. The disease started in Sky Sports, carried airborne to Batch of the Day and became pandemic by its easy transfer across the litter of the rag trade. Flattered. Apparently we were flattered by the scoreline. Even Sparky was forced to agree when he […]

Did I say I was confused? Two fullbacks playing as central midfielders, goalie as sweeper, sweeper as pivotal defender, wingers playing as wingers. Looks like Pep has never heard of Brexit. In Europe the keeper acts as sweeper when they are down to ten men so with the full complement it should feel like we […]

2016 and all that. As a City fan I have more words for ‘confused’ than Eskimos have for ‘snow’. Bewildered, baffled, mystified, bemused, perplexed, confounded, befogged, disconcerted, nonplussed, thrown, flummoxed, discombobulated, fazed, stumped,  foxed (oh no, no foxes). There’s no way I can expect a particular team to turn out because I can’t keep track […] 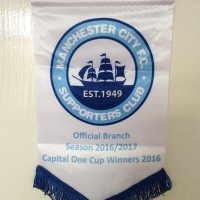 Our Branch Pennant has arrived and Membership Cards are now being sent out to Members.