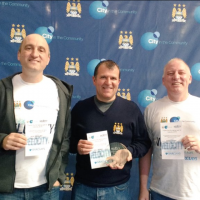 Reddish Blues Nick Crowhurst, Neil Jackson and Shaun Sefton represented the Supporters Club at Velocity for CiTC before the Stoke game. Pictured are the lads at the Velodrome with their certificates and trophy for the most distance travelled in an hour, well done!!

There was I about to declare our power in dispensing with little teams like Bournemouth, PSG and Chelsea when Newcastle sticks out a foot and trips us up. Back to basics v Stoke with a 4-nil victory, as per usual we don’t know what to expect and results difficult to predict. Typical City really. It’s […]

Billy’s Blog – Paris in the springtime

Well indeed his nose was offside for their second goal and if Fernando hadn’t gone on his holidays just at the wrong moment we’d be returning with a victory but is everybody happy? You bet your life we are. Can’t wait for next Tuesday, just the little matter of the Baggies first. Our first game […]

With Arfa Bollock in goal a victory was always expected. Our defence started with Aguero on their 12-yard line. That second goal was sublime; as the ball left Kun’s foot it found its way into the net via Silva and KDB without touching the ground. How can you defend against that? Impossible. A repeat of […]