Home » General » We will remember them….

As we approach Armistice Day we remember the City Players that fell in 1917.

Scottish International Alexander ‘Sandy’ Turnbull, an FA Cup winner with City in 1904, and a league winner with United signed up to fight in 1915 and joined the Footballer’s regiment, the 23rd (Service) Battalion of the Middlesex Regiment. By 1917 Sandy had been made up to a lance sergeant and was about to take part in the Battle of Arras.

Turnbull’s Battalion was to assault the northern approaches to the village of Cherisy as part of a series of attacks to become known as the Third Battle of the Scarpe. Zero hour was set for 03.45.

The attack itself initially provided some success, with the village reportedly falling into British hands during the first hours of the assault. There followed some bitter fighting, however, and Cherisy would soon be back under German control.

It was in the chaos that L/Sergeant Turnbull was reported missing. It was reported that he had been wounded and that his comrades hoped he had been taken prisoner. Unfortunately he had been killed on 3rd May 1917 and has no known grave but is one of 34,795 names commemorated on the Arras Memorial to the Missing, located in Faubourg d’Amiens.

Jimmy Conlin held a number of firsts with City, he was the first player the Club had paid £1000, the first ever City player to be sent off and became the first City player to be capped by England. He signed up in 1914 and was first sent overseas in 1915. Conlin took part in the Battle of the Somme in 1916. It was in June 1917, during the third Battle of Ypres, on 23rd June Conlin was killed in action. Jimmy Conlin has no known grave and is commemorated on the Nieuport memorial.

Thomas Callaghan was a winger when City signed him from Glossop North End, and impressed in the reserve team. He would only ever make two appearances for City. Callaghan was killed during a trench raid on the 2nd February 1917 and is buried at Chester Farm Cemetery, which is located 5 kilometres south of Ypres town centre on the Vaartstraat.

Two former Arsenal Players were killed in action during 1917: 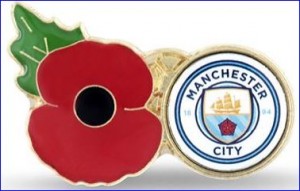