I think most are aware of the sad passing of Tony Griffiths and most of you will know Tony for his tireless work and fund raising for the Sierra Leone Branch with Armani Sheku Kamara. The World is a poor place without Tony but his legacy in Sierra Leone will live on.

At 60 minutes during the Middlesbrough game on Saturday there will be a minutes applause to celebrate this great man’s life, please put your hands together for Tony.

In addition to this, in the Matchday programme, there will be a tribute to Tony from City in The Community (CiTC) recognising his achievements.

Below is a message from his family along with the funeral arrangements.

As a family we would like to thank everyone for their kind words of condolence at this sad time we truly have taken comfort from your kind words.

As a family we would like to invite yourself and any others that knew Tony Griffiths to his funeral.

The service will be held at Cresta Court Hotel in Altrincham (WA14 4DP) on Thursday 10th November at 10:30.

Followed by a committal at Altrincham Crematorium (spaces are limited).

We plan on then returning back to Cresta Court for refreshments, some of you may wish to remain there after the service and not attend the cremation, this will be a accommodated.

Family flowers only, donations may be given to charities chosen by the family the details of which will be at the venue.

It is with great regret that I must inform you of the death of Anthony “Tony” GRIFFITHS He died on 26th October 2016 aged 60 yrs After joining Manchester & Salford Cadets in 1972 Tony joined GMP and was posted to the E Division where he served on both North and South Sub-Divisions before promotion to Sergeant saw him move to Altrincham. He also served with distinction as a Sergeant in the CID.

He spent time working with Bill Roberts in Sierra Leone where he retains respect to this very day (especially from the MCFC Fan club he founded and nurtured!). After retirement he returned to GMP and worked at Nexus House where his skills were of great use during complex enquiries. He was and remained a lifelong and truly committed supporter of Manchester City FC.

By way of a funeral, a humanist service will be held for Tony at 10:30 am on Thursday 10th November 2016 at The Cresta Court Hotel, Church Street, Altrincham WA14 4DP. This will be followed by a short service at Altrincham Crematorium for family & close friends. Family flowers only please; donations in lieu can be made to several charities.

The family will then return to The Cresta Court where a buffet will be served and reminiscences about Tony shared. I am indebted to Martin Hazelhurst for the sad tidings. 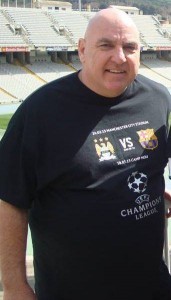