The confirmed EDS Players for our November meeting on Tuesday 17th are ‘keeper Angus Gunn and midfielder James Horsfield.

Son of Norwich City institution Bryan Gunn, Angus didn’t have to look far for inspiration for a career between the posts.

Sharp reflexes and strong wrists are just two of the characteristics that attracted England u16s coach Kenny Swain to Gunn for their Victory Shield campaign in 2011/12 and he went on to represent the Three Lions at under-17 level last season.

His ambitious streak was highlighted when shortly after signing his first-year scholarship with City he was already targeting a regular place in the Elite Development Squad for the Next Gen Series, however, a troublesome hip injury took a huge chunk out of Angus’s season.

Gunn returned for the final few months of the season and was one of City under-18s’ best players, saving a couple of penalties and pulling off a string of eye-catching saves to steady the ship as the age-group enjoyed a solid end to the 2012/13 campaign.

Angus signed as a first-year pro in the summer of 2013 and was an integral member of the under-19s squad which qualified from Group D of the inaugural UEFA Youth League.

He endured a frustrating second half of the season after suffering a shoulder injury which kept him out after Christmas.

In all, Gunn made just two league appearances and turned out on four occasions in Europe until his injury but he’ll be hoping to kick on and impress again in the u21 Premier League and UEFA Youth League in 2014/15. 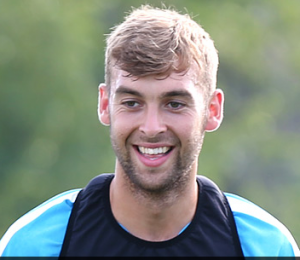 “Horsy” hails from Hazel Grove and has been with City for more than ten years, signing on as a first year scholar in July 2012.

Described as a born leader, James captained the u16 side and wore the armband for the u18s with increasing regularity during the 2012/13 campaign.

A midfield lynchpin with a great eye for a pass, James is a versatile member of the squad who can fill in at right back or take a well-struck penalty when the occasion requires.